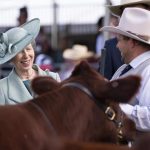 The 2022 Sydney Royal Easter Show has now concluded for stud beef exhibitors but the weeklong event saw high level achievements by our Society members.  Some highlights include –

: a brief engagement with the Princess Royal during the Shorthorns judging – pictured with Scott Bruton of Roly Park

(The Princess Royal commenced her three-day visit of Australia by returning to the Sydney Royal Easter Show, which she first opened with her mother, brother and father in 1970.  Anne was the guest of honour at the opening ceremony for the event as it celebrated its 200th anniversary).

Congratulations to all involved and our grateful thanks to those members of the Society who provided an excellent display of Australian Shorthorn exhibits – Roly Park, Meadow Vale, Ardyakka,  and Tipperary.